Why Join a Union?

What are the Benefits of Being a Union Worker? There is a proven relationship between the level of union membership and the size of the American middle class. 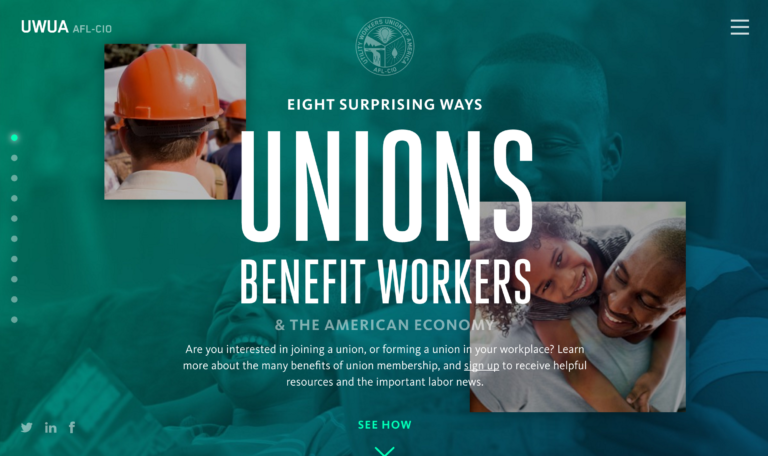 What are the Benefits of Being a Union Worker?

A labor union is an organization that acts as an intermediary between its members and the business that employs them. The main purpose of labor unions is to give workers the power to negotiate for more favorable working conditions and other benefits through collective bargaining.

Collective Bargaining
Collective bargaining is the heart and soul of the labor union. Collective bargaining occurs when a group of people, such as the workforce at a company, bands together to increase its negotiating power. For instance, a single worker might feel that a certain new safety measure should be implemented in his factory, but he might have limited power to get the company to install the new measure. If the entire workforce is made aware of the need for the new measure and bands together to pressure the company to install it, there is a much greater chance that the company will comply. Labor unions join workers together, allowing the voices of individual workers to be heard and made into a goal of the whole union. Unionized workers typically elect representatives to bring their concerns to the union’s attention.

Workplace Safety
When labor costs more, employers invest more in training and equipment, which improves workplace morale and boosts productivity. When workers are taken care of, everyone benefits. The antagonism between business and organized labor is not inevitable.But when employees are considered disposable, businesses can become less interested in protecting them. Employees also may lack someone to intervene on their behalf with management on safety issues when there is no union representation.When workplaces become organized, the need for cooperation becomes more obvious. Companies recognize that they can take steps to make a stable workforce more safe, productive and effective, through training, better equipment, and making better use of their knowledge. Unions, in turn, increasingly recognize the needs of employers to be responsive to customers and competitive in their markets. In some sectors, having a company story that involves union workers and living wages may be a competitive advantage commercially.

Union workers get about 20 percent more in terms of wages (not including benefits) compared to others in similar jobs that aren’t supported by a union. Union workers are also more likely to enjoy consistent pay raises on a regular basis.

Bureau of Labor Statistics via AFL-CIO

Higher Wages
One of the top benefits of being a union worker is that you enjoy a better wage as compared to your non-union counterparts. Union workers get about 20 percent more in terms of wages (not including benefits) compared to others in similar jobs that aren’t supported by a union. Union workers are also more likely to enjoy consistent pay raises on a regular basis. This is due to collective bargaining between the union (on behalf of the employees) and the employer that results in an agreement setting out clear terms regarding pay and wages. With a non-union job, the employer can set the wage without any formal bargaining process or input from the employee.

Bringing the power to you!